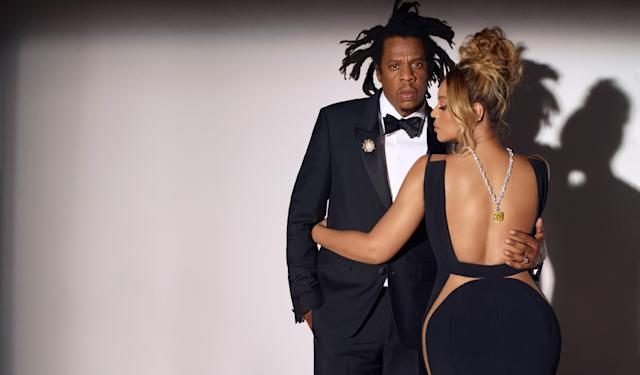 The New Tiffiny Campaigns starring Jay-Z and Beyoncé  that are probably going to get the eyes, there is always a need to move overboard. For the Tiffany & co., where the famous singer is adorning 128.54 carat of Tiffany Diamond which were previously worn by other three people including Audrey Hepburn to host the luxurious collections of precious jewels.

Undoubtedly the exclusive collection of fancy Yellow diamond accumulated on the long chain that holds over 100 carats of diamonds that looks amazing around Beyoncé ‘s neck in the new Tiffany’s campaign about Love. The exclusive photography was done with Masone Poole along with June Ambrose behind styling along with Marni Senofinte who accompanied the shot by the director of Black in King – Emmanuel Adjei. Jawara Wauchope was behind her hairstyling accompanied by Nakia Rachon who pulled the hair on top in a glam updo. The dramatic cat eye make that looks absolutely fantastic and accentuate her features was done by John Barnett. The 22-carat priceless necklace matches a yellow diamond ring. The eye-catching diamond pieces are the ones that she wears throughout this campaign.

Jay-Z on the other side has been found to wear a clean tux which has been complemented with the black cutout dress and curve-skimming along with the amazing piece of jewels. One of the most amazing pieces found on Jean Schlumberger is that the 20th century masterpiece was being redesigned to pair the rapper’s cuff links. Paired with the yellow Gold, Platinum Apollo brooch and other Tiffany Pieces includes their collection of engagement rings for men.

The executive Vice president of the communications of the product – Alexandre Arnault said “Beyoncé and Jay-Z are the epitome of the modern love story,” He also added, “As a brand that has always stood for love, strength, and self-expression, we could not think of a more iconic couple that better represents Tiffany’s values. We are honored to have the Carters as a part of the Tiffany family.”

The first time the couple has been seen together on the big screen and it’s no wonder to think of the buzz that they have created after this. Tiffany is also willing and looking forward to donating $2 million to the historical black universities and colleges.

It is no doubt that the fanpower of these stars together is available across the globe that will instantly catch the attention along with the fan following of Tiffany. The latest version of Moon River “song which is sung by none other than Beyoncé and has been captured on the Super 8 film again by Jay-Z. If you are an art fan, you can find something similar with the painting by Equals Pi which was rendered in the Tiffany Blue. You will find the film on their website on 15th September. Fans already cannot wait for the film to get released and sing the icing song on her voice. Until then the blinding images of diamonds adorned around your neck will be the fans on their toes.