The Tomorrow War movie review: The biggest villain in this Chris Pratt movie is its nonsensical script

It starts off showing Dan Forester (played by Chris Pratt), an Iraq War veteran and biology teacher, watching the FIFA World Cup, sitting and enjoying with his family. And then there starts the chaos with people coming in from 2051. The reason being, Aliens. 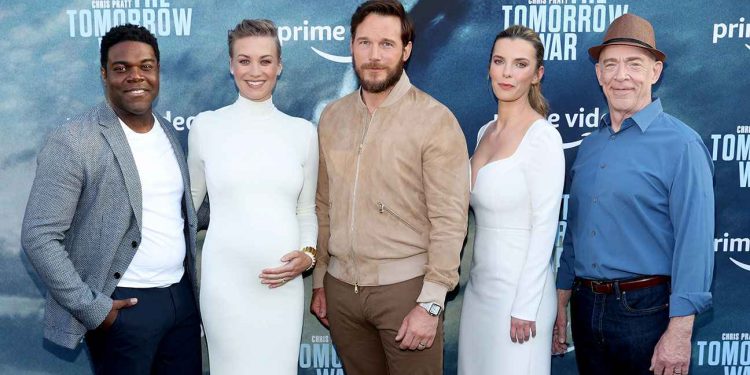 The Tomorrow War movie is one that works much as an escapist film. The movie kind of tires the audience out with sudden emotional blasts. It is like, every time there starts a scene that is enjoyable for all who are watching the movie, there comes a sacrifice whereby some beloved character or a misplaced dialogue spoils your immersion.

Here is how the movie goes. Also, SPOILER ALERT.

It starts off showing Dan Forester (played by Chris Pratt), an Iraq War veteran and biology teacher, watching the FIFA World Cup, sitting and enjoying with his family. It is the year 2021. This year is important as the next scene shows that a wormhole materialising right in the middle of the field on TV. Through this wormhole, several people step out and start claiming that they are from the year 2051. The reason why they are returning to the year 2021 is that in 2051, humanity is on the verge of extinction due to an alien invasion, and request reinforcements. Till now, the movie has just started and the foundation has been built. Is it a good one? It’s an acceptable one.

To this, the world governments decide to send their soldiers to the year 2051, to investigate of course. What they lean is that it is in fact the truth and that the survival rate is 20 per cent, which leads to compulsory conscription as clearly people would rather not barge right into the middle of an invasion by malignant aliens. As the movie needs to now proceed, Forester is drafted and leaves a tearful wife and daughter behind.

The premise might by now sound very familiar. And you are not the only one to feel so.

If this premise sounds familiar, you are not mistaken. The Tomorrow War has taken, for want of a better word, ‘inspiration’ from frankly much better movies. The obvious source of ‘inspiration’ is Doug Liman’s Edge of Tomorrow. But it isn’t just a copy, and has other inspirations too, such as the echoes of Independence Day in the international response to the alien threat and Alien in the design of extraterrestrials, and so on.

It can actually be said that the movie has a script that has been generated by a machine that has been fed some definite algorithm.

But it’s not The Tomorrow War’s undoing. The blame lies with the plot which is nothing but ridiculous, and the characters and their personality which has no good points and only works to get the movie in a worse position. Bizarre stuff keeps happening, and you are meant to take everything at face value. If it was a self-aware, dumb action movie like, say, the recent Mortal Kombat movie, the silliness would be more palatable. Here, the script wants you to take every daft thing seriously.

The movie also frustrates the audience because of the continuous process of shutting down happy moments. It makes one crave for the interval. Once a movie makes that mistake, there is no turning back. A lot of the action, granted, would have looked impressive on the big screen with sounds effects. On a TV, it was just okay.

However, there is one thing that is applaudable. The design of the aliens, They do look like nearly unstoppable killing machines with more tentacles that can be handled by humans. But even that sense of dread is minimised by inconsistency — at the beginning, nobody can figure out how to kill the grunts, and by the end, they are dispatched with relative ease. This movie clearly thinks it’s much smarter than it actually is.

One thing can be said, the movie isn’t a complete failure, it does have a decent actioner, but the script is too substandard to make it even a dumb summer entertainer.