The Empire and Engineering Girls: Series streaming this weekend.

The Empire on Hotstar or the second season of Engineering Girls on Zee5. What to watch this weekend? 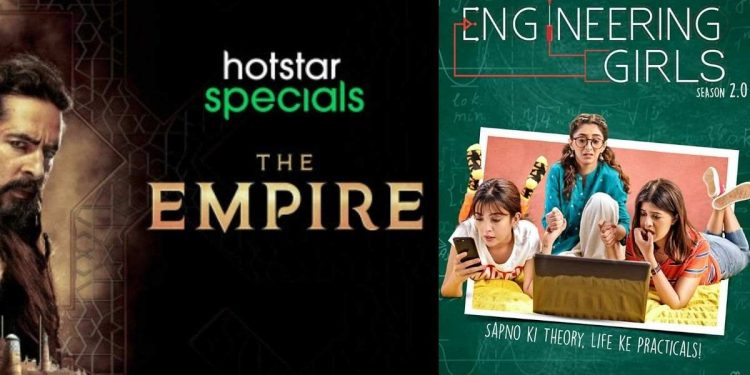 Due to covid-19, all theatres were closed. Fans were not able to see their favourite star on the big screen. But we were able to see them on our phones and TVs at home. Most of us have spent time watching web series and movies on different online platforms in the Pandemic year.

Now the theatres are open, and Akshay Kumar starer Bell Bottom was the first movie to be released in theatres after a long time. Now fans can watch their favourite star on the big screen too. Along with that, several series are about to be released on different OTT platforms. The Empire, Engineering Girls season 2, The Witcher, and many more series.

This weekend The Empire and Engineering Girls season 2 are set to hit the OTT platform.

This show is all about the life of 3 friends Maggu, Subu, and kara, in an Engineering college. In the first season, the series revolves around their doomed life, relationships, and other drama in the college.

The second season of Engineering Girls will be streaming on Zee 5 from 27 august 2021. Zee5 dropped the trailer of the show on 17 August 2021. Directed by Apoorv Singh Karki, season 2 also revolves around the three friends. But this time it will be a new experience. The girls will face their final year of college. This season is all about the stress they face over exams and their careers and how they decide to spend their last few months of college. They realize that the final year is their last chance to do whatever they want to do in their college life because these days will never come back.

The Empire is a historical fiction series based on Alex Rutherford’s first book, The Empire of Moghul series-Raiders. The show is created by Nikkhil Advani and produced by his sister Monisha Advani and Madhu Bhojwani under Emmay Entertainment. Directed by Mitakshara Kumar, This magnum opus shows the exploits of the first emperor of the Mughal dynasty, Zahīr Ud-Dīn Muhammad Babur. The show’s plot focuses on his life, family, and his rivalry with Muhammad Shaybani Khan.

Check Out : Netflix Announces the Premiere Date for Season 2 of “The Witcher”

Muhammad Shaybani Khan defeated Babur and took control of Samarkand. It created difficulty for Babur and forced him to pay attention to the Delhi sultanate of Ibrahim Lodhi, and this led to the First Battle of Panipat. This Battle then led to the formation of the Great Mughal Empire in India.

The show consists of eight episodes, and it will be streaming on Disney+Hotstar from 27 August 2021. The show stars Kunal Kapoor, Dino Morea, Shabana Azmi, Rahul Dev, and more.

Which one is the best?

Both series are best in their ways. One is a historical show, and the other one shows the life of Engineering students and the fun they have in college. If you have an addiction to watching series and shows, you can watch both.