Infection of Rugos spiralling whitefly (RSW) on coconut-, oil-palm-, banana- and other plantations have been observed, by scientists in the state. The severity of the rugose whitefly infection, which showed a declining trend in the state during 2020, reappeared in September this year. In December 2019 and the following year, the infection, was almost controlled. 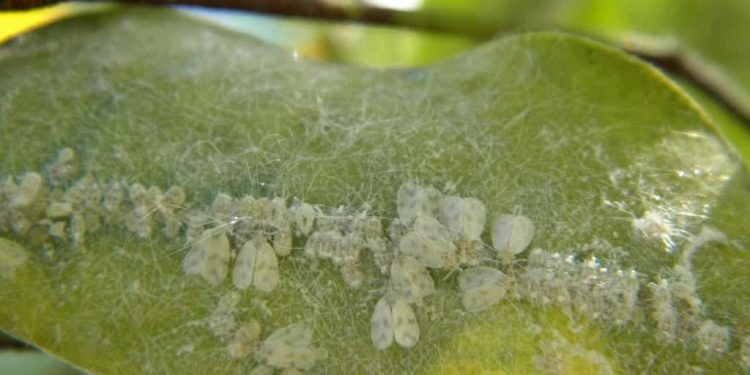 Infection of Rugose spiraling whitefly (RSW) on coconut-, oil-palm-, banana- and other plantations have been observed, by scientists in the state. The severity of the rugose whitefly infection, which showed a declining trend in the state during 2020, reappeared in September this year. In December 2019 and the following year, the infection, was almost controlled.

According to sources, the incident has been reported, in East and West Godavari and Nellore districts. RSW has invaded crops like coconut, palm oil, cocoa, banana, etc.

Chief Scientist of Mango Research Station (MRS) B. Kanaka Mahalakshmi said, they were creating awareness among farmers to control RSW. Doing it by one or two farmers alone will not yield the desired results. She says that the farmers of the entire village/area will have to take control measures.

Scientists like Horticulture Research Station (HRS) BV Chalapathi Rao at Amabajipeta said that good results, can be obtained with I. phumosaurosis by spraying at 10-15 days intervals with a high jet sprayer when there is no high temperature.

They say that spraying, should be started early in the season when RSW populations, are observed, as it can have a greater impact and reduce and prevent the build-up of RSW populations.

“The problem has been brought, to the notice of the state government,” says MVS Nagi Reddy, vice-chairman of the Andhra Pradesh Agriculture Mission. Under Central Government sponsored schemes like Rashtriya Krishi Vikas Yojana – Beneficial Approach for Agriculture and Allied Sector Rejuvenation (RKVY-RAFTAAR) suggested to set up bioagent multiplication units and supply adequate quantity to farmers to prevent pest Was it is said.

Check Out : Why did these young men leave the soil and start farming in water? : Hydroponic Farming

Horticulture department officials say that there is a possibility of a 15-20 per cent reduction in yield. As part of measures to control the spread of the infection, the government is supplying Isaria fumosaurosia, a fungicide and bio-pesticide, to farmers through the department, he says.

Mr Nagi Reddy says, coconut is cultivated in 55,000 hectares in East Godavari, 25,975 hectares in West Godavari, 15,685 hectares in Srikakulam and 7,769 hectares in Visakhapatnam districts. Palm oil is cultivated, in 1.80 lakh hectares in the state. The need for special attention, was emphasized to control the pest on a priority, basis as it was causing heavy damage to important plantations in coastal areas and was likely to spread to other crops, he says.

RSW was first reported in the nursery gardens at Kadiam in East Godavari district in late December 2016. The pest can enter the state through infected coconut plants acquired from Kerala. The incidence and severity have since diminished, scientists, say.