Samsung launched the 5G version of Galaxy M32 in India.

Samsung Galaxy M32 5G has been launched in India as a mid-tier 5G smartphone. 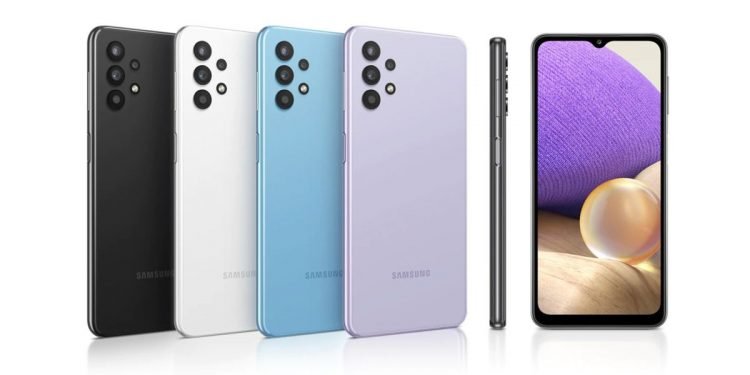 The Korean tech company Samsung has launched its new smartphone Samsung Galaxy M32 5G in the Indian market today, on August 25. It has launched in the market with a starting price of Rs. 18,999 on Amazon, which you can buy from September 2. The smartphone has been launched in two variants, one with 6GB RAM and 128 GB of storage while the other has 8GB of RAM. Equipped with an octa-core MediaTek Dimensity 720 processor, Samsung launched it as a mid-tier 5G smartphone. Let’s check the specifications of the device.

Samsung has powered the Galaxy M32 5G with an octa-core MediaTek Dimensity 720 processor. The base model of the smartphone has 6GB of RAM with 128GB of inbuilt storage. The storage is expandable up to 1TB via a microSD card. The advanced model has equipped with 8GB of RAM.

Samsung Galaxy M32 5G comes with a 6.5-inch HD+ TFT Infinity-V notched display. The dual-SIM (Nano) smartphone runs the latest Android 11 with OneUI 3.1 on top. There are thick bezels all around the smartphone, especially at the bottom.

Samsung Galaxy M32 5G smartphone has a quad rear camera setup for photography and videos, whose primary camera is 48 megapixels. Apart from this, an ultra-wide-angle secondary lens of 8 megapixels has been given to the smartphone. There is also a 5-megapixel macro lens and a 5-megapixel depth sensor. As for the front camera, a 13-megapixel selfie shooter housed in the notch front-facing camera is given to the device for selfies and video calling.

Check Out : Amazon launched the 2nd generation of Echo show 8 in India

For power, Samsung Galaxy M32 5G smartphone has a 5000mAh battery which comes with a 15W fast charging support. As for the connectivity, the smartphone provides 5G, 4g LTE, Bluetooth 5.0, Wi-Fi, NFC, and GPS. Also, a USB Type-C port has been provided in the smartphone.

Samsung Galaxy M32 5G will be available on the Amazon and Samsung online store from September 2. It will also be available in offline retail stores across the country. The starting price on Amazon for the 6GB RAM + 128GB storage variant is Rs 18,999. The price for the other variant has not been revealed yet. There is also an instant discount offer of Rs 2000 available on Amazon if you purchase the smartphone using ICICI Credit cards or Credit/Debit EMI.