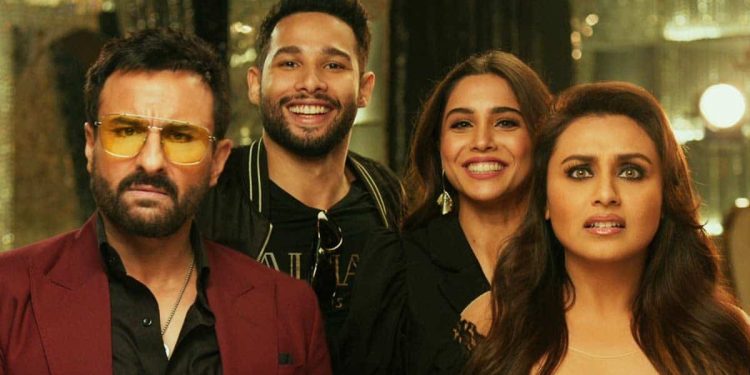 The first teaser of Saif Ali Khan and Rani Mukherji’s film ‘Bunty Aur Babli 2’ is released. Both the stars are working together in this film after 12 years.

The teaser of Yash Raj’s most awaited film ‘Bunty Aur Babli 2’ is released. The teaser is funny, and hopefully, the film will also be entertaining. Rani Mukerji, Saif Ali Khan, Siddhant Chaturvedi, and Sharvari are the main characters in this film. The director of Bunty Aur Babli is Varun V Sharma, and the producer is Aditya Chopra.

Saif Ali Khan and Rani Mukerji will be seen together on the silver screen after 12 years in Bunty Aur Babli 2. Fans love to see both of them together. The two have previously worked together in ‘Tara Rum Pum’ and ‘Hum Tum’.

Check Out : Sooryavanshi Movie: Celebrate this Diwali with your family in theatres.

The teaser of ‘Bunty Aur Babli 2’ is 1.26 seconds. The teaser begins with Saif Ali Khan and Rani Mukerji. In the teaser, you can see both Saif Ali Khan and Rani Mukerji touching up their look. Rani tells Saif that after how many years Saifu we are working. Saif says that after 12 years, they have come together. Rani says that she missed working with Saif a lot.

The movie has 2 Bunty Aur Babli,

We can see Saif and Rani getting ready for the shoot. And Siddhant Chaturvedi and Sharvari coming from behind, and they both say so are we. After hearing that, Rani asked them, who are you, they both replied, we are Bunty and Babli in response, Rani immediately says, there is only one Babli, and that is me.

After this, director Varun says that Aditya sir has changed the script. Now there are two Bunty and Babli in the movie. Both Rani and Saif go to their respective make-up rooms. After this, Siddharth and Sharvari say that we are ready and their time is over, and they get packed.

Bunty Aur Babli is going to be released, on 19th, November

On November 19th, fans can see Bunty Aur Babli on the big screen in theatres. The teaser of the film is quite funny.