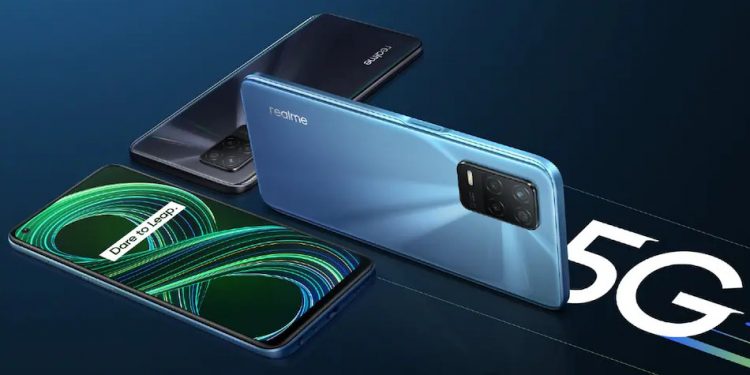 Realme 8 5G has grabbed its audiences’ attention through its 5G capabilities. But set aside that, it can be said that the phone provides a very average performance for its price point. One of the reasons for this review is that Realme 8 5G belongs to a price group that makes it important for its performance to go uphill to compete with the phone which comes at the same price.

Realme announced that it would be coming up with Realme 8 5G on 21st April 2021. Just 7 days later, its eager audience was presented with the new phone. Realme 8 5G was released on 28th April 2021.

( The given prices are in accordance to the same given in Flipkart).

Much like Realme 8, it has a glossy back, which gives it a shine but tends to get a lot of fingerprints. The camera hump has retained its rectangular shape and has a triple camera setup. It comes with a thickness of 8.5mm and claims to be the thinnest among the 5G phones, though the same does not stand true for the non 5G ones, which makes it a bit disappointing. Apart from this theoretical knowledge, the phone feels pretty light practically, which somehow makes up for its thickness. The phone has AI inscribed at its back and has thankfully removed its ” Dare to Leep” quote. Coming to its buttons, it has been designed well, and has its fingerprint sensor In combination with its power button, a path newly taken by Realme.

This Realme phone has taken up IPS LCD Panel instead of AMOLED display. The display as an aspect ratio of 20:9 and 6.5 inch screen size. Realme 8 5G offers a good, punchy, and slightly saturated display. With these features, the phone works well even under harsh sunlight, but its colour shift capabilities isn’t at par with its price.

The Realme 8 5G comes with the new 7nm MediaTek Dimensity 700 SoC. This feature make it better than Realme 8, which uses the MediaTek Helio G95. The phone is undoubtedly the fastest phone in its price range. This gives the same an increasingly good score with it comes to good performance. It is one of the few phones which has succeeded in providing its users a fast performing device that a budget price rate.

Realme 8 5G has a primary camera of 48MP Samsung GM1 sensor. It is quite evident that it isn’t the best combination for a Realme phone. The phone does come with an ultra-wide lens, but does not have noteworthy photo capturing capabilities. It does not peform well where light is less, although it provides a decent shot when under good lighting. It also happens to smooth out pictures, thereby destroying details which would have been otherwise important. It should be notes that the device does not perform well while capturing any fast moving item.

Realme 8 5G comes with 5000mAH battery, and supports 18W charging. It somehow is disappointing as Realme 8 came with 30W charging. Nevertheless, the phone performs for about 6 hours on full use and around 12 hours on regular use. Regarding its charging speed, it takes about 2 hours for the device to get completely juiced.

Realme coming with its 5G connectivity has definitely bought up the competition. But it has lagged behind in other features. The phone would be best for someone who is ready to sacrifice few features for 5G connectivity. There is also the fact, that purchasing this phone would allow the user to use it for a longer period when compared to other users who stuck to purchasing 4G today. The display, camera and battery are not high end but isn’t the worst as well. In the same way the overall performance of the phone isn’t the best, but might be ideal for someone who wants a 5G phone at a budget price.

Realme 8 5G has grabbed its audiences’ attention through its 5G capabilities. But set aside that, it can be said that the phone provides a very average performance for its price point. One of the reasons for this review is that Realme 8 5G belongs to a price group that makes it important for its performance to go uphill to compete with the phone which comes at the same price.