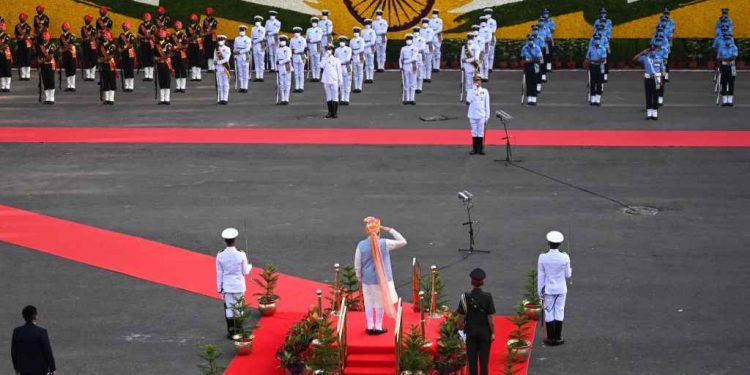 After unfurling the Tricolour and addressing the nation from Red Fort’s ramparts, PM Modi, who was speaking on Sunday to mark the 75th Independence Day, praised Pandit Jawaharlal Nehru, the First Prime Minister of India, and referred to the long struggle for freedom. This day is dedicated to the memory of our great freedom fighters. We are grateful to all those who helped bring Independence, whether it was Jawaharlal Nehru or Lal Bahadur Shastri.

The prime minister, wearing a traditional kurta with a churidar, complemented by a blue jacket, and a red-patterned, saffron headgear was seen making a nearly 90-minute speech. He also demanded a review and revision of all rules and procedures in the country to ensure that no process is a hindrance to people or the country.

“Yahi Samay Hai, sahi-samay Hai, Bharat Ka Anmol Shamay Hai (This is the moment. It is the right time. It is precious for India),” he declared, reciting a poem towards the end of his speech. Modi added another dimension to his famous slogan “Sabka Saath Sabka Vikas”, by adding a new call, Sabka Prayas (everyone’s effort), stating that this would be crucial for the achievement all the country’s objectives.

PM Modi addressed the nation and stated that the Centre will soon launch the Gatishakti National Master Plan. This is because India must adopt a holistic approach to infrastructure building. In the next few days, Gatishakti National Master Plan will be revealed. Gatishakti, a project worth more than Rs 100 lakh crore, will provide employment opportunities for young people and aid in the development of holistic infrastructure.

The Prime Minister also praised the efforts of Frontline and Health workers and Corona war heroes. “During the pandemic our doctors, nurses and paramedical staff, as well as sanitation workers, were working with a feeling of service to the nation. He expressed his gratitude to all those who gave their time to help others during this difficult period.

Modi also expressed gratitude for the vaccination program of India and said that Indians have shown great patience during this struggle. While we faced many obstacles, we were able to work with exceptional speed in every area. India is no longer dependent on other countries for vaccines. It’s because of our industrialists, scientists, and engineers. India has the largest Covid-19 vaccination program in the world. Up to 54 crore people have been vaccinated so far.