by Viveka Massey
in Entertainment
29 1
0 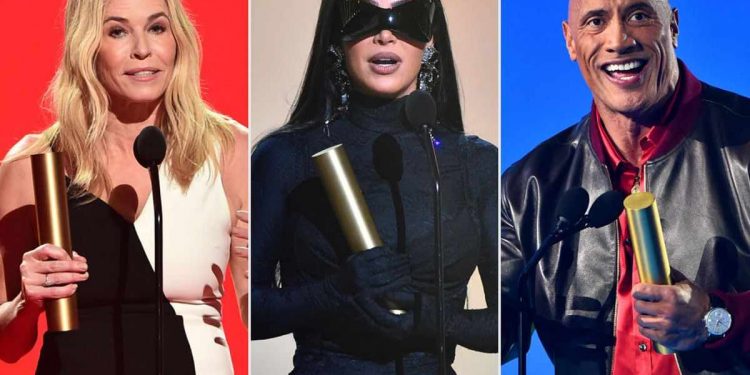 It’s another star-filled night as Hollywood honors the end of the year. The People’s Choice Awards 2021 took place on December 7 in Santa Monica, California. As always, celebs rocked their sizzling looks on the red carpet, and these pictures are proof of it. From Dwayne Johnson to Sarah Hyland and more, celebrities put on a stellar performance.

The 47th People’s Choice Awards was hosted, by Saturday Night Live star Kenan Thompson, who made jokes and gave a lot of laughs to the celebrities attending the event. Among the nominees, Justin Bieber leads with 10 nominations, while Black Widow stars Scarlett Johansson, and Florence Pugh has garnered six nominations each. Also, this year’s special honors include Kim Kardashian receiving the Fashion Icon Award, Christina Aguilera for the Music Icon Award, and Dwayne Johnson receiving the 2021 People’s Champion Award.

As far as appearances on the red carpet are concerned, it’s a pleasure to see Halle Berry rocking the likes of HER and some serious fashion goals.

Check Out: Aaron Carter and Fiancée Melanie Martin Break Up a Week after Son’s Birth, They ‘Will Continue’ to Make Son Their ‘Priority’ After Split

Other big nominees at this year’s People’s Choice awards include actor Sterling K. for his TV show. Brown, Jason Sudeikis, and Angela Bassett. In the music category, the K-pop group BTS received approval in three categories. Namely Group of 2021, Song of 2021, and Music Video of 2021. Other music artists competing in major categories include Lil Nas X and. Adele. Marvel shows Loki and WandaVision have also received major nominations.