The Ice Road is like a callback to all those past thrillers that have already used many of the beats and twists here and, if nothing else, it nestles in nicely with the rest of Liam Neeson's late-stage action flicks. To know more, read ahead. 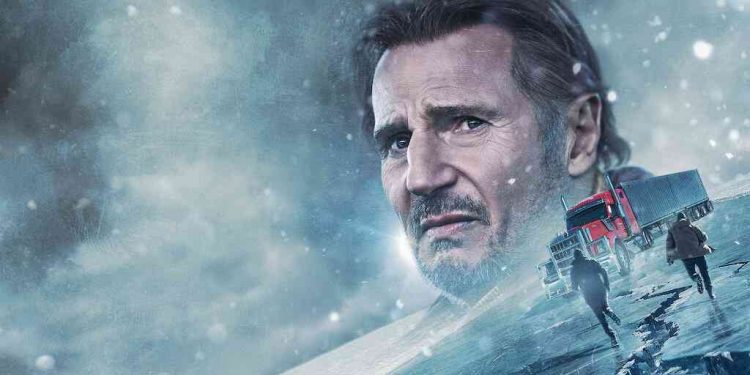 The Ice Road is a modestly exciting disaster flick by Liam Neeson. The movie showcases an adrenaline trek through the Canadian tundra and has its own thriller scenes. The Ice Road is a by-the-numbers thriller that exists nicely as empty calories, briefly formidable but ultimately forgettable. Of course, since the movie came with such a feeling, different people are bound to have different opinions, but in the end, it will not be leaving a great impact.

That being said, it is obvious that the movie does not have any stand-out scenes which would leave the audience wanting a follow-up.  In another life, this film would have taken a straight-to-Redbox route, providing a cool-headed compromise for those unable to decide on what to watch on a given Friday night. The effects are okay for the audience and without even mentioning it, the movie gets the credit of being watchable for reasons of the ice road. The movie takes a weird route, where every time it reaches a verge where you feel like everything is going to fall apart, it automatically solves the situation. In the same manner, whenever the characters come to a situation where it seems like they are going to have a bad ending, there comes a sheen of suspense. But then horrid-looking explosions, ice cracks, and avalanches zip you out of the tension pretty quickly and undermine a lot of the action. As stated before, it is going to leave you as a part of the audience who has no clue as to how he/she should feel.

Three truck drivers are assigned the task of rescuing those people who were trapped inside a diamond mine after the said mine collapsed. The ice plays a part here as these three drivers are to do what they are asked to do over thinning April ice. The clock is ticking and they’re going to hit every obstacle available. Because little do these emergency truckers know but the mining company has employed devious assassins (lol) to stop them. The killers in this case are going to take out the three heroes in ways that will be taken as accidents. Hitmen employed by those in charge because they need to cover up the fact that the company took shortcuts and inadvertently caused the cave-in. The Ice Road has managed to get the vibe of a disaster movie with touchings of a movie that is akin to 1993’s Cliffhanger. The ideology here is brilliant, but the movie does not impart this brilliance and rather gets stupid with few parts just not suiting the scenario presented in the movie.

The writer of Die Hard with a Vengeance and Armageddon, Jonathan Hensleigh, has directed the entire adventurous movie earnestly, giving few surprises in the movie from his own script.  Any pertinent information about methane, mining, trucking, ice roads, and more get exposition to heck, and then all that information comes back in some fashion, usually weaponized against the villains. These villains are, without intention, comical, and the midpoint of the movie, gets very predictable considerable time ahead. Not a very good symbol, is it? Occasionally though, The Ice Road is able to pile up, and pile on, enough challenges and problems for our heroes that it can suck you into its frosty drama.

Neeson’s character in the movie, Mike is someone who has been characterized as a gritty elder brother who cares for his veteran brother (played by Marcus Thomas) whose past story has it that he has suffered combat injuries which have resulted in him having aphasia. Shifting from one job to another, like a modern era George and Lennie, the siblings have been ostracized from legit trucking gigs. Neeson basically does his thing here, which is to say he’s a gruff hard-ass with “someone to care about,” while the film itself sort of cheats at the end and offers up a disturbing solution for their challenges.

When considering all the characters in the movie, Legion’s Amber Midthunder plays the most interesting character of the batch. He shows up nicely motivating the supporting players such as Tantoo, a character who has the personality of a no-nonsense indigenous driver who has a police record due to protesting. Tantoo allows this antiquated actioner to feel a bit more youthful while also getting in, and spreading out the information dump, which is divided up between her, Neeson, and Laurence Fishburne’s dispatcher.

Aside from all this, there’s no such thing in the movie that would caption it as “dreadful”.  Yes, it does have some  CGI shots or few such formulaic elements that may make you realize there are better thrillers out there involving snow, but none that would say that word.  Or trucks. Or Liam Neeson. Honestly, and it’s more darkly comedic, you’d do better with 2019’s Cold Pursuit.

All in all, it can be said that The Ice Road is like a callback to all those past thrillers that have already used many of the beats and twists here and, if nothing else, it nestles in nicely with the rest of Liam Neeson’s late-stage action flicks. As usual, it has those scenes where if obstacles pile up, the ticking clock element of the story certainly adds tension but overall things play out rather predictably and tediously.