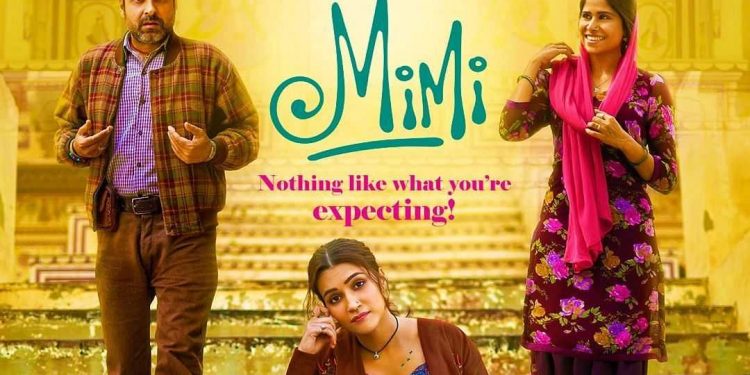 Mimi features Kriti Sanon, Pankaj Tripathi, and Sai Tamhankar entangled in a surrogacy conundrum. The movie is set to release on July 30th on platforms of Netflix and Jio Cinemas.

Kriti Sanon quite excitedly announced the date of release of her upcoming movie MIMI along with its interesting trailer on Twitter. This movie has reunited Kriti Sanon with her ‘Luka Chupi’ director- Laxman Utekar. As it is quite evident, the actors expect a big success from this movie owing to its fresh and new storyline.

To talk of the trailer released, it has successfully managed to create hype among netizens. The three-minute-long trailer has revealed the storyline pretty much in a patchy way. The trailer’s opening scene shows Pankaj Tripathi, Kriti Sanon, and Sai Tamhankar traveling in a taxi where the beginning lines of Pankaj Tripathi’s character talk of how being a mother has a special feel to it.

Right from the very first couple lines of interaction between the movie leads to formulating the foundation and a fair idea in the viewer’s minds as to what context does the storyline of this movie runs alongside. The very same is later brought into clear light when Pankaj Tripathi’s character suggests Kriti Sanon’s Mimi to become a surrogate mother, in exchange for which she will bag rupees 20 lakhs. This very incident is shown to have marked as the starting point of the stark turn the easy-going movie is supposed to take later on.

As anticipated, Kriti Sanon’s character coming from a poverty-stricken family, decides to keep her surrogacy a secret and goes on to live with her friend, who is the character played by Sai Tamhankar. The real deal of conundrum begins here when the two outsiders are introduced as a Muslim couple but in the eyes of others, are often viewed with a doubtful eye. The trailer also features a few scenes that will pop some of your funny bones.

Apart from the hilarious parts of the trailer, the movie is speculated to undergo a tragic twist during Mimi’s journey of being and living as a surrogate mother. Pankaj Tripathi in the beginning is shown to propose Mimi with the offer of being a surrogate mother for an American couple for 20 lakh rupees, but later as it turns out to be, the couple refuses to carry on with the deal while suggesting to have the baby aborted and Kriti Sanon’s character is left devastated on hearing this. From this point on, Mimi’s life is shown to have undergone various twists, turns, and turmoils. To add a monotonic twist of tragedy, the director has made sure to capture Kriti Sanon’s anguished faces that are evidence of her amazing acting skills and expertise.

The movie also reflects on the lesser-known realities of being a surrogate mother and the downsides of it.

Sharing the video on Twitter, Kriti wrote, “#Mimi expected everything, except for this unexpected journey! Watch the glimpse of her unexpected story with your family. #MimiTrailer out now.” Netizens are expecting a watchable experience from the movie. Until then, let us wait for the movie to be released!