Man pays emotional tribute to his late wife by recreating maternity pics with his daughter.

To pay a heartwarming tribute to his deceased wife, A man recreated the maternity photos with his one-year-old daughter.

by Viveka Massey
in Entertainment, News
31 2
0 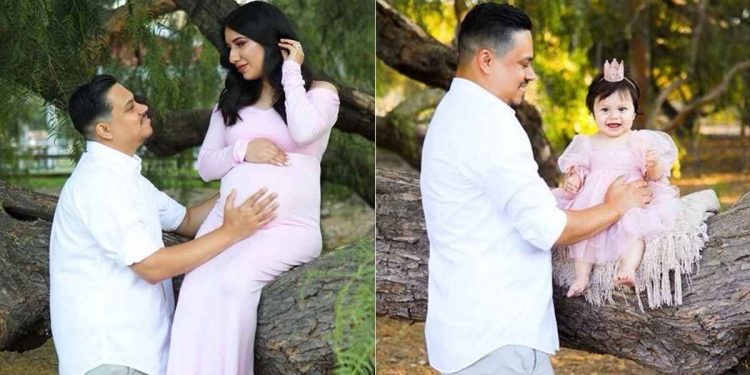 James posted the photos he took with his daughter with the caption, “It’s been a tough journey, but I did it with my head held high. I try to be the best father I could be for my daughter. I want to make my wife proud. Adalyn, I know if your mommy was here, she would have been the happiest person alive. She would be so excited to celebrate your birthday that’s why I’m making sure I fulfill her wishes and wish her the happiest birthday ever baby. Your mommy and daddy love you.”

James lost his wife in a car accident. A car hit Yesenia when James and Yesenia were out for a walk. She was 35 weeks pregnant at that time. The Surgeons performed an immediate C-section to save the infant. The baby survived, but Yesenia could not make it.

James informed why he recreated the photos with his daughter on her birthday. James said Adalyn’s birthday was on the way, and it was on the same day when he lost his wife. He added that it was his daughter’s first birthday and his wife’s death anniversary. He wanted to do something special for both of them. He wanted to give a tribute to her wife and thank her for his daughter. He even said that he got her daughter a pink outfit similar to what her mother wore at the photo session. James added that they did the photo session on the same spot to recreate the pictures. And the result was incredible.

The pictures went viral on Instagram. Internet users ended up in tears after seeing James’s heartwarming gesture to his wife. Many users commented under the picture. Someone wrote, “Your beautiful wife is alive and watching over her beautiful little angel and you. The story is just heartbreaking.” Another user commented, “God bless you and your daughter live and long life together and many more.”

One user said, “Happy Birthday Beautiful!! You do look like your mommy, and I know she’s right there with you in spirit.” Another wrote, “So beautiful. Your wife is so proud watching down on you. Only God knows why he chose you to live this life. So tragic yet beautiful all at once. You’re doing an amazing job as a parent.”

After seeing the pictures, many people said Adalyn looks like her mother’s twin. This heartful gesture teaches us that love is truly one of the purest emotions in the world. We wish James and Adalyn a wonderful life ahead.