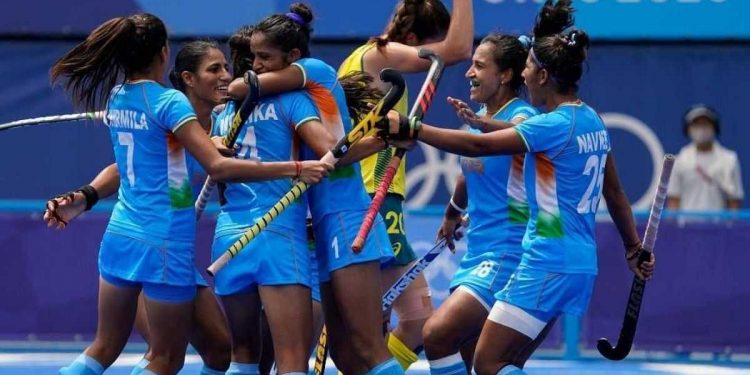 Team India marked its impact after winning the hockey battle against Australia and also successfully made its way into the Olympic semifinals. Indian Gurjit Kaur made a winning goal for India in the match against Australia.

India’s women’s hockey team made history for the first time by entering the semi-finals round of the Olympics after defeating Australia 1-0 and successfully booked their place as one of the semi-finalists. It was Gurjit Kaur’s penalty goal made in the second quarter of the match that got India the winning card against Australia.

This event of India winning its place in the semi-finals is indeed worth appreciation as talking of the match, it was quite against the odds for India to win a match against Australia because it has always been the winner. And winning a match against an unbeatable opponent is quite a big deal.

Regardless of the hardships in their way, Indian hockey players decided firmly to prove their capabilities and showcased a brave performance throughout the match. Gurjit Kaur proved o be quite vital for the match-winning as she flipped the game with her 22nd minute and surprised the Australians.

To drive down the memory lane, India gave its best performance in the Olympics back in the year 1980 at Moscow Games where they finished fourth out of the other six. In that very edition of the games, women’s hockey too made its debut in the Olympics where the sports was played in a round robin format.

The semifinal round of the Olympics will be played against Argentina, and the team will be led by Rani Rampal.

The Indians were seen to have started rather slowly but have now caught up with the pace and are getting into the much-needed momentum.

Australia had the chance to take the first shot at the goal but Indian goalkeeper Savita managed to dodge it just right  Amrosia Malone’s shot was therefore successfully denied and thereafter Indian players adopted an aggressive mode throughout the game and also caught the Australians being off guard quite a lot of times. India’s quick pace and adaptability to the game seemed to have taken the Australians by astonishment as they were not efficiently able to defend and were neither lucky enough to have made a goal in the very first quarter of the match.

In the ninth minute, skipper Rani Rampal’s deflection from a Vandana Katariya shot hit the back post as Australia managed to survive. A minute later, Broke Peris’ shot from top of the circle just went wide past a fully stretched Savita.

The Indian players also created another opportunity in the first quarter of the match but an attentive goalkeeper Rachel Lynch came out of her line to deny Sharmila Devi’s shot from a one-on-one situation. The Australians pressed hard in the second quarter and secured their first penalty corner in the 20th minute which was defended brilliantly by India.

The Indians were bold and courageous while defending as minutes later, Deep Grace Ekka got a vital stick to keep out Emily Chalker’s strong hit from close range.

Just after a few minutes, India successfully secured their first penalty corner and Gurjit, who had a disappointing outing so far in the tournament, rose to the opportunity and converted the situation into India’s benefit and stun the Australians.

Down by a goal, the Australians attacked with numbers at the change of ends and Mariah Williams came close to restore parity but Savita came in between. Australia scored three back-back-to-back penalty corners quickly but the Indian defence, commanded by Savita and Deep Grace Ekka, remained like a rock in front of the goal. Following that, Australia pressed hard within the Indian circle, but the Indians were able to withstand the onslaught with some gutsy defence, not unwilling to put their bodies on the line. The pressure was unrelenting on the Indians in the closing eight minutes of the game, with Australia securing four more penalty corners but unable to break the Indian defense’s determination.

There is more success to come in India’s part. Let us cheer for more such success in future matches and hope the best outcomes!