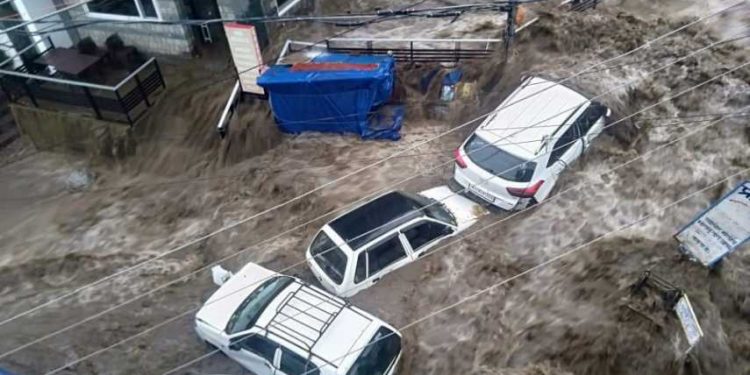 Popular travel hotspots Dharamshala and Mcleodganj which are thronged by tourists despite several warnings from the authorities of the third wave of Covid, saw no respite as they recorded 79.4mm of rainfall within 12 hours, resulting in a flash flood that washed away several vehicles and caused severe property damage. The Central Government, taking cognizance of the situation, has been working with the state government to extend all possible support and provide immediate relief in the affected areas.

The Indian Meteorological Department has issued a yellow weather warning and predicted more rainfall in the next few days and as a precautionary measure, all flights to Dharamshala airport have been cancelled. The Central Government has deployed National Disaster Response Force (NDRF) teams to the flood-affected areas for a rescue mission, Home Minister Amit Shah announced on Twitter. According to ANI reports, 2 teams of NDRF were deployed to Bhagsu Nag in the Shahpur division and a few teams are on stand-by in Nurpur after Kangra (Himachal Pradesh) District Magistrate summoned for help. Several Hotels in Kangra district have reported extensive damage and two persons were reported missing after the flash floods, Himachal Pradesh Chief Minister Jai Ram Thakur said. He issued directions to all Deputy Commissioners and SPs to stay alert and prevent tourists from going to areas that are prone to landslides.

Several video clips and photos of tourists’ and local vehicles floating away in the floods and buildings and houses crumbling down as a result of getting swept in the flood went viral on social media on Monday. The Deputy Commissioner of Kangra, Dr Nipun Jindal took to Twitter and requested people to postpone their travel plans to Dharamshala to avoid further inconvenience. He has requested the locals and the tourists who are already in Dharamshala to avoid venturing out to tourist spots and stay put as the movement of traffic was impacted due to the damage caused to the roads by the rainfall.

He, along with Superintendent of Police Vimut Ranjan, visited Bow Valley where around 20 people were stranded after the landslide on Monday. Massive disaster response operations to evacuate the areas, provide relief to the affected people and shift them to temporary shelters were undertaken by the administration.

Manali SDM Raman Gharsangi has reported that the damages are being assessed and the drinking water irrigation scheme has been damaged by the cloudburst. Officials have been advised to look into the matter immediately and repair the water supply schemes as soon as possible, he said.

The Chandigarh- Manali Highway also witnessed a massive Landslide that, according to reports, buried 50 people at Kotrupi Village in Mandi District of Himachal Pradesh. The terrifying incident took place at around 12:24 am after which the Mandi- Jogindernagar road was closed and the traffic was diverted to an alternate route. The survivors were pulled out of the cobblestone by rescue teams, and the army, police and home guards have been deployed in the area. Tourists have been advised to avoid taking that route until the landslide is cleared and since the alternate route to Manali has also been blocked, motor communication with Manali and Lahaul Spiti is on halt as of now.

Himachal Pradesh has seen a massive inflow of tourists after the ban on travel and tourism was lifted. Despite the very high probability of a 3rd Wave of Covid hitting anytime soon, the number of tourists visiting the state has been quite huge. Pictures of the overcrowded streets of Manali and the long queue of vehicles on highways causing traffic jams have been floating through the internet. The Union Health Ministry had recently written a letter to the state of Himachal Pradesh, expressing concern about the danger of Revenge Travel, after which a fine of Rs 5000 or an 8-day jail term was declared for tourists found violating covid guidelines.