Ingenuity Helicopter of NASA captures a 3D view of the rock-covered mound on the Martian surface.

After the 13th flight of NASA’s Ingenuity Mars Helicopter on 4th September, it captured a rare 3D image of a rock-covered mound on the Martian surface. 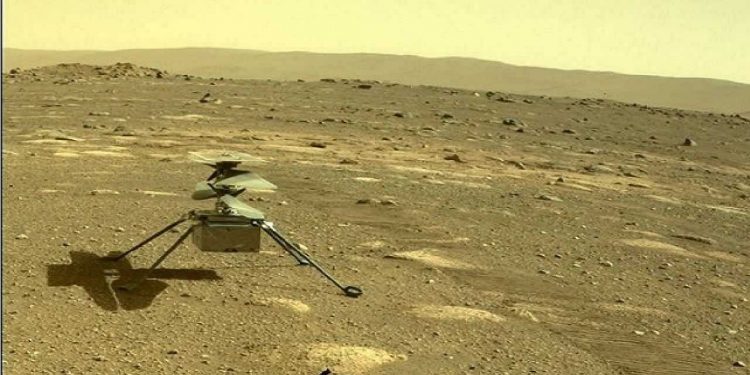 Nasa said that the mound is just in the north-centre of the image, along with some rocks shadows. It is about 33 feet (10 meters) wide. On the top of the image- are a portion of Artuby and a ridgeline about half a mile (900 meters) wide. The Mars rover team calls the geologic target image “Faillefeu.”

Further, the space agency informed several sand ripples that populate the South Seit region of Jezero Crater on Mars are visible at the bottom of the image and vertically up to the middle.

The 3D view that was created by combining data from two images is called an anaglyph. It gives the best view with red-blue glasses. Nasa said, “Astrobiology is a key objective for Perseverance mission on Mars. It also includes the search for signs of ancient microbial life. Red Planet’s geology and past climate will be characterized by the rover. This mission will be the first one to collect and cache Martian rock and regolith.”

Check Out : Volcanic Eruption in Spain’s La Palma Island Ends Up Destroying Home With Its Lava

The Ingenuity Mars Helicopter that reached Mars in the SUV-sized Perseverance rover is the first helicopter to fly beyond our planet. While displaying the engineering marvel from NASA, the rotorcraft was able to fly in the thin atmosphere of Mars. By flying an aircraft on another planet, the Ingenuity team has created history.

Spacecraft will be landed on Mars to collect these sealed samples from the surface, and then those samples will be bought to earth for in-depth analysis. NASA is helping to prepare human exploration of the Red Planet, and the Perseverance mission is a part of NASA’s Moon to Mars exploration approach, including the Artemis missions to the Moon. The building and managing operations of the Perseverance rover are in hands of JPL, which is managed for NASA by Caltech in Pasadena, California.