Including Tuesday’s goal, the Manchester City player has now directly contributed to 20 goals in his last 19 games for England of which he has scored 14 and provided six assists. 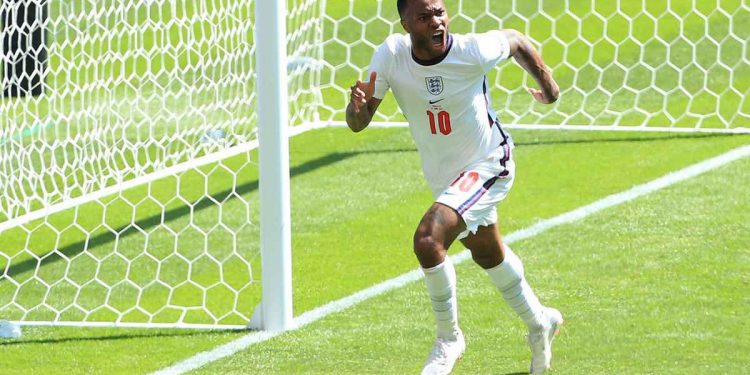 A young boy in a No. 10 shirt is seen with a ball cradled between his right arm and high while admiring at the magnificent amphitheatre. This whole scenario is tattooed on Raheen Sterling’s left forearm.

In an interview with ITV in 2018, Sterling had described the tattoo, “This is a tattoo of Wembley Stadium. As a young boy, I used to walk around Wembley or be on my bike. Hopefully one day I can be wearing that No.10 in that stadium, be in my hometown, and hopefully be the King of Wembley one day.”

Sterling grew up in the same place where the Stadium is located, in London, in a North-West borough named Brent.

He was given the England No. 10 shirt at the 2018 World Cup. Sterling has scored two goals in three games of the Euro 202. These two goals were ones that secured England in the top Group D and ensured that play their round-of-16 tie at home. Its the same goals which has kept England’s dream alive to winning that final at Wembley.

On Tuesday, Sterling got a good start while playing against the Czech Republic. He had almost succeeded in opening the scoring seconds into the game as he found space behind the Czech defence but could not do so as his chip over Tomas Vaclik struck the post. That was from the left. When he did score, however, it was from a run on the right, the 26-year-old popping up to nod home a Jack Grealish cross.

Sterling has been Englands most potent goal threat as of now, with Harry Kane yet to emerge from the shadow he is in. England manager Gareth Southgate after the win against Croatia shared his view by saying, “I’m so pleased for Raheem to get the goal. He’s a good player and his goalscoring record suggests we should have faith in him.”

Sterling has often received criticism for his lack of patience in front of the goal. However, even after this flaw, Southgate stuck with him and gave him the freedom to roam in the front third. Southgate is now being rewarded for his decision. Including Tuesday’s goal, the Manchester City player has now directly contributed to 20 goals in his last 19 games for England of which he has scored 14 and provided six assists. He also happens to be the first England player to have scored two goals at Euro finals since Wayne Rooney and Frank Lampard in 2004.

Rio Ferdinand, a Former England and Manchester United defender said that he feels that Sterling has developed into a player who isn’t bogged down by criticism.

He wrote about this to BBC, “He doesn’t need any validation of his performances. He’s used to seeing his selection being questioned for the club as well as country, even when it is clearly ridiculous to do so and, like a lot of the really top players, he is able to use that negativity as fuel. You can see he has a steeliness about him and, far from feeling any pressure, he will just see this tournament as the perfect stage to show people what he can do.”

Luck wasn’t really on Sterling’s side for a while as he didn’t start for Manchester City in the Champions League quarter-finals and the semi-finals before being given in an opportunity in the final. Due to lack of game since March had set him back and hence couldn’t make much of an impact in the match against Chelsea.

Conveying his disappointment about being benched, Sterling said, “If you’re not playing, you’re not happy. That’s been me since a kid.”

There are rumours that are being heard which tells that Sterling is perhaps being made part of a deal through which Kane will be brought to the Etihad, but he is in hopes that his performance in the Euro will end up convincing the CIty against this deal and to keep him on the roster.