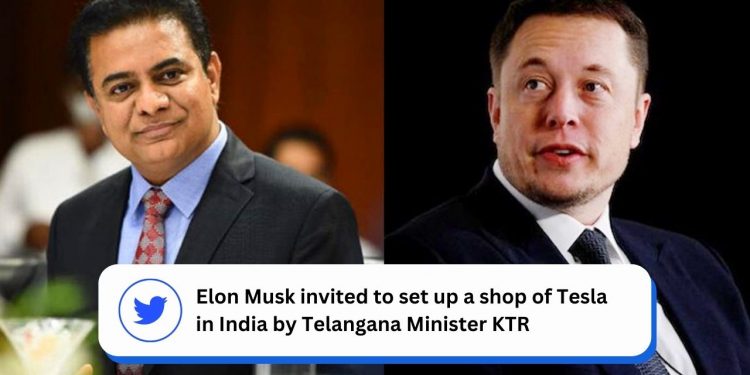 Industries Minister K. T. Rama Rao welcomed Tesla to establish its unit In Telangana, with the assurance that the city in India has the most promising and investor-friendly industrial policy in the nation. A wide range of social media users who regularly use the platform have come across the minister’s post, and the majority of them have praised the action.

Telangana has been a major attraction for prestigious firms like Google, Apple, and Microsoft, among others, thanks to the aggressive marketing tactics of the proactive Telangana Minister and TRS scion, KTR. Recently, he extended the red carpet to the Kitex Group of Kerala, which later signed an agreement comprising an investment of INR 2,400 Cr in the state.

People responded with hilarious replies, and many of them supported the notion of bringing the electric car manufacturer to India.

The Tesla CEO and the government have been at odds for many years on a variety of problems, including a nearby plant and the nation’s hefty import taxes. Before entering the market, Tesla has been urging the government to lower import duties on electric vehicles.

The government, however, is emphatic that Tesla should create in India rather than combining components that have been Completely Knocked Down (CKD). Tesla is attempting to exert pressure on the government through social media, and this is not the first time, according to government officials.

The Indian government had previously instructed the US-based electric vehicle (EV) automaker to first begin producing its EVs in India before requesting any tax breaks.

Musk said in a tweet from last month that India’s import taxes are among the highest in the world and that the country’s treatment of clean energy cars is incompatible with its stated climate aims. A facility in India is “very likely,” according to the billionaire if the California-based automaker can first test the market by importing cars.

Currently, India levies a 100% import duty on fully imported vehicles with a Cost, Insurance, and Freight (CIF) value which is over $40,000, and a 60% charge on vehicles with a CIF value under that sum.

Tesla is up against stiff competition from local manufacturers in India. Mercedes-Benz recently announced that it would introduce the first domestically built premium electric automobile in India this year. Although domestic automakers like Mahindra, Tata, and Maruti, as well as foreign automakers like Audi, have launched electric automobiles, the widespread adoption of such cars is low. With only 4% of all sales in India accounting for four-wheelers, the country has a very low 0.8% EV penetration rate. While Tesla’s entry would encourage India to adopt EVs, the automaker’s price range might easily be a roadblock for a country where people are very price-conscious.

The Government and Tesla are still locked in a deadlock that is being played out in the open. While the future is still unclear, local and other international businesses need to hurry up the pace and begin manufacturing in India.