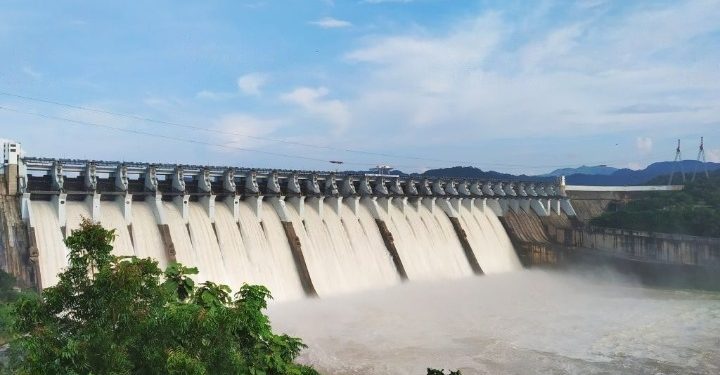 Good rainfall in the Sardar Sarovar dam catchment region in Gujarat’s Narmada district has resulted in the creation of 2,142 million units (MUs) so far this year, which is nearly double the equivalent time last year. According to official figures, the month of August has provided the most to it.

Both Gujarat and neighboring Madhya Pradesh have experienced excessive rainfall this monsoon season, according to the India Meteorological Department (IMD). The Narmada River has a total basin size of 97,410 sq. km, of which 85,858 sq km are in Madhya Pradesh, and 9,894 sq km are in Gujarat.

According to statistics supplied by SSNNL, 2,142 MUs of energy were produced through September 20 this year, as opposed to 1,129 MUs until September 30 in 2021, according to data shared by the SSNNL. The installed capacity of RBPH is 1,200 MW.

During the monsoon months of July, August, and September, a total of 1,849 MUs were created out of the total of 2,142 MUs. According to SSNNL data, August was the most successful month for the RBPH this year, with 901.298 MUs of electricity generated.

Very excellent rainfall has resulted in much more water released from Madhya Pradesh than last year. An increase in dam height since 2017 has also led to an increase in electricity generation, added SSNNL’s Chief Engineer.

According to the statistics, the electricity generated during FY 2021-22 was 923.7 MUs.

The RBPH produced 1,265.28 MUs of power in 2021. In the fiscal year 2013-14, the RBPH recorded an all-time high energy production of 5,216.80 MUs. The influx of water from the catchment region is entirely responsible for electricity generation reaching an all-time high this year.

We don’t know how long the influx from Madhya Pradesh will last or how long the overflow will last. As there is no such projection, we cannot state with certainty that RBPH power generation will beat the all-time record, he added.

The RBPH and CHPH of the Sardar Sarovar Hydroelectric Project (SSHEP) have installed total capacities of 1,200 MW and 250 MW, respectively. According to the statistics, the CHPH generated 589.3 MUs by the September of this year.

The Narmada, the Peninsula’s largest west-flowing river, begins in the Amarkantak Mountain ranges in Madhya Pradesh. The river runs across the states of Madhya Pradesh, Gujarat, and Maharashtra.

The green electricity produced by the SSHEP facility, which has a total installed capacity of more than 1,400 MW, benefits Madhya Pradesh the most. Madhya Pradesh consumes more than 50% of total energy output, trailed by Maharashtra at 27% and Gujarat at 15%.

Apart from strong rainfall, an increase in the dam height (the highest level at which water can be held) to 138.68 meters with the installation of gates has also contributed to an increase in its power-producing capacity, according to government sources.

The NCA has given the Gujarat government final authority to boost the dam’s height by roughly 17 meters, from 121.92 meters in 2014, shortly after Narendra Modi became PM of the country.