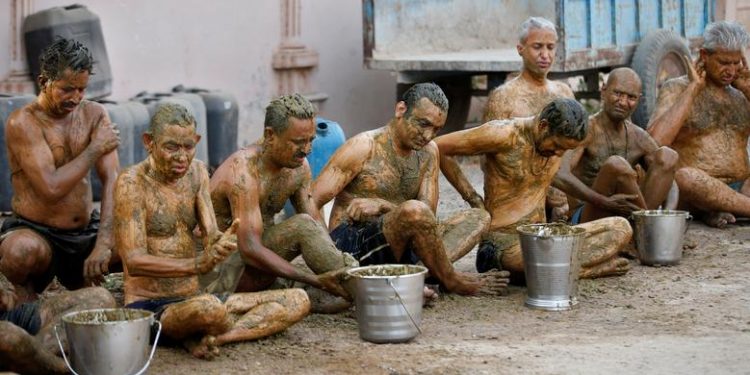 India being a religiously influenced nation has always been confounded in its most principles of age-old traditions and Ayurveda. Among the Hindu community, cows are considered sacred animals, who stand as a symbol of life that should be protected and revered. But many a time, it is often seen among people who tend to follow rumors and false beliefs or rightly called superstitions and cause more harm than benefits.

A recent rumor that crept among the Gujarat population was about cow dung’s newly found potential to cure COVID-19 by helping build stronger immunity. After the rumor spread like wildfire, cow shelters were oozing with human traffic as people from across the state were seen to be visiting nearby cowsheds where they carried out their methods of ‘treatment’ against COVID-19.

People were seen to be covering themselves in mixtures formed of cow dung and urine, right from head to toe. In addition to this, they waited for hours until the pack dried and hugged the cows in honor of their possessing therapeutic and healing properties. In the meantime, they practiced yoga postures and exercised with the hope to boost their immunity against COVID-19 and later washed off their body packs with milk or buttermilk. Sources even said that doctors too were recorded to be visiting the cow sheds once a week to carry out the “immunity-boosting” procedure.

Although believed, fresh cow urine is supposed to own antiseptic properties, yet its effectiveness against COVID-19 is neither proven nor researched. Doctors have no scientific evidence to prove its efficiency in providing any sort of immunity against coronavirus. On the contrary, doctors and scientists repeatedly warn people not to undergo such processes, which although gives a platonic sense of protection, can put people in danger of contracting other severe diseases.

Dr. J.A. Jayalal, national president at the Indian Medical Association said, “There is no concrete scientific evidence that cow dung or urine work to boost immunity against COVID-19, it is based entirely on belief.” Besides this, a threat to contract the coronavirus is also at its peak because the process involves people gathering in large numbers, which in turn violates the primary precaution of social distancing for protection against the deadly virus.

Current stats show a total of 22.6 million cases of coronavirus in the country, with over 2 lakhs of deaths reported on the same. Lack of oxygen cylinders, scarce availability of hospital beds, and basic health amenities are adding to the misery of the ones suffering from COVID-19.

In these times of devastation where the pandemic is perpetrating blows of frustration and losses of lives, there are still some who are spreading rumors and people are blindly following the same in an urge to protect themselves from the potential threat of contracting the virus. It is advised that people should follow the ruled-out set of government guidelines and precautions divulged by the WHO and not believe in any forwarded messages falsely claiming to provide cures and treatments.