Three gold medals were won by Deepika Kumari, on Sunday, at the Archery World Cup in Paris. Deepika has to her name nine gold medals, a dozen silver medals and seven bronze medals from the World Cup. 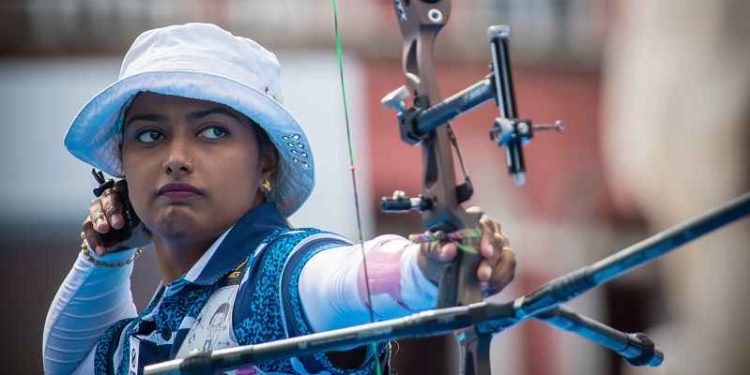 Three gold medals were won by Deepika Kumari, on Sunday, at the Archery World Cup in Paris. Having accomplished this, she has now completed an incredible and unparalleled whitewash for India in the tournament and regained her world number one ranking.

Deepika achieved stage 3 at World Cup in Paris and since then she has stormed her way up to the summit of three gold medals in approximately five hours. She won all three of the potential gold medals, completing a clean sweep of the recurve division.

The Ranchi archer commented on this and said, “This is the first time I’ve won all three medals in a World Cup. I’m really happy but at the same time, I’ve to continue improving as we have some very, very important competitions lined up.”

Deepika first won the women’s recurve team gold alongside Ankita Bhakat and Komalika Bari in a convincing win against Mexico.

The 27-year-old then went ahead and teamed up with her spouse Atanu Das, and the pairing rallied from a 0-2 deficit to defeat the Netherlands’ Sjef van den Berg and Gabriela Schloesser 5-3 for gold.

Deepika was hoping that she would clinch medals in Tokyo as India does not have any  Olympic medals in archery. She happens to be the only female archery representative from our from India to participate in the forthcoming Tokyo Olympics.

Deepika has to her name nine gold medals, a dozen silver medals and seven bronze medals from the World Cup.