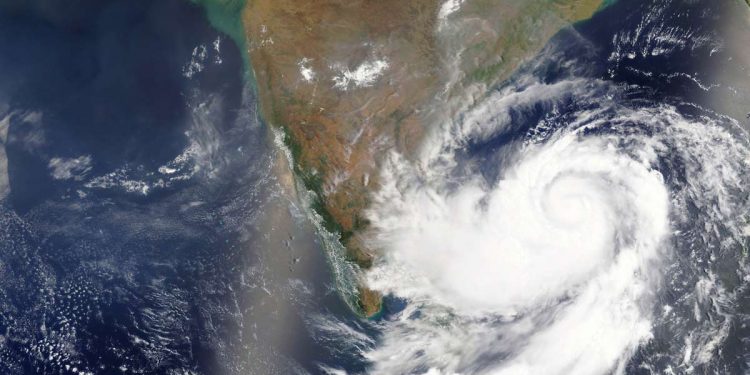 Cyclone Yaas is now reported to be turning severe and the threats are imposed on people living in the states of Bengal, Bihar, Odisha, and Uttar Pradesh.

Live Update: Cyclone Yaas has strengthened into a strong cyclonic storm, and it is expected to make landfall on the north Odisha coast around midday on May 26.

The India Meteorological Department (IMD) claimed in a recent update on Twitter that severe cyclonic storm “Yaas lay centered at 320 km SSE of Paradip, 430 km SSE of Balasore and is anticipated to reach north Odisha coast at midday on May 26th as a VSCS (Severe Cyclonic Storm).”

In six states, including Odisha and West Bengal, the NDRF has committed 109 teams. Hundreds of people have been evacuated from both states’ coastal zones to safer locations.

During the following 24 hours, Cyclone Yaas is expected to strengthen into a severe cyclonic storm. By the morning of May 26th, it would have reached the northwest Bay of Bengal on the shores of north Odisha and West Bengal. As a Very Severe Cyclonic Storm, it is expected to cross the north Odisha-West Bengal coastline between Paradip and Sagar islands around midday on May 26th.

YS Jagan Mohan Reddy, the Chief Minister of Andhra Pradesh, has urged all responsible officials to take all necessary precautions in the wake of the Yaas Cyclonic Storm. He convened a meeting to discuss the Covid crisis as well as the state’s continuing immunization program.

The chief minister directed the officials to make alternate arrangements for continuous oxygen delivery and to concentrate on oxygen supply and storage. He also requested that officials relocate Covid patients from cyclone-prone areas before Yaas makes landfall. He sent the chief secretary to Vishakapatnam to keep an eye on the issue.

Rahul Gandhi while showing concerns over the cyclone’s growing severity said- “Cyclone Yaas is moving towards Bengal and Odisha from the Bay of Bengal. I appeal to Congress workers to provide all assistance ensuring the safety of those affected. Please follow all precautionary measures.”

The two power companies in West Bengal assert that they are more prepared for Cyclone Yaas than they were for Cyclone Amphan. The state-owned West Bengal State Electricity Distribution Company Limited and the commercial utility CESC Limited have said that their goal this time is to reduce consumer discomfort.

CESC Vice President (Distribution) Avijit Ghosh told PTI that his company was more prepared this year than during the Amphan crisis. “Then we ran out of manpower since many of them had returned to their homeland as a result of the first wave’s lockdown. This year, though, we have 2,500 individuals on the ground, which is more than twice the number from the previous year.”

According to a WBSEDCL official, the restoration of power lines to medical institutions such as hospitals, safe homes, vaccine storage places, drinking water lines, mobile towers, and crematoriums would be prioritized. All employees’ leaves have been suspended, and at least three gangs will be stationed in each block of the state’s distribution region, according to the official.

The Odisha government has authorized a special labor rate of $462 for unskilled labor, $522 for semi-skilled labor, and $597 for skilled labor for post-cyclone Yaas restoration work, which is 50% more than the rates declared by the Odisha Labor and ESI Department. A daily budget of $175 has been set up for meals and other expenses.