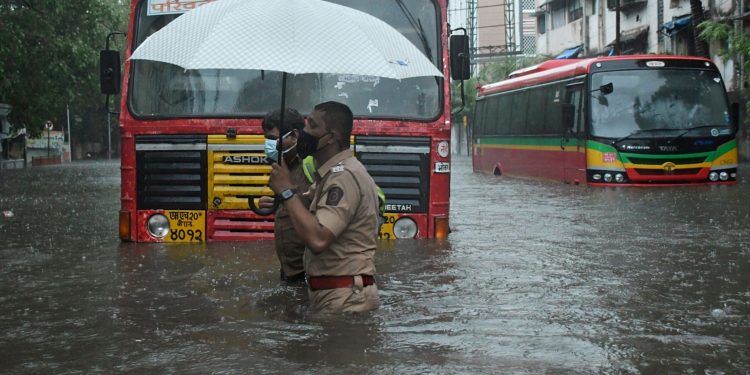 According to the latest IMD forecast, Cyclone Tauktae will degrade into a hurricane by Tuesday evening, and the residual of the storm will continue moving northeastwards for the next two days, passing through Rajasthan and West Uttar Pradesh.

Rainfall is forecast in most locations under its control, with moderate to very heavy falls in isolated areas.

May 18, 1pm Update: According to the recent IMD update, Cyclone Tauktae has de-intensified from a Severe Cyclonic Storm to a Cyclonic Storm. The present wind speed near the centre is 80-90 km/h, with gusts up to 100 km/h.

Over the next six hours, the system is predicted to deteriorate further into a deep depression.

The cyclone is reported to have caused massive loss of lives and livings.

“Three people have lost their lives due to cyclone Tauktae. Around 40,000 trees have fallen and 16,500 huts have affected in the state due to the cyclone,” stated Gujarat CM Vijay Rupani.

Thanks to the effects of Cyclone Tauktae, Mumbai received 230 mm between 8:30 a.m. on Monday and 8:30 a.m. on Tuesday, the highest 24-hour precipitation the city has ever seen in the month of May.

Rainfall of more than 204.5mm is classified as ‘very high’ by the IMD.

Severe Cyclonic Storm Tauktae has been heading north-northeastwards at a sluggish speed of 6 kmph for the past six hours as of now being 1 o’clock. Its de-intensification seems to have slowed, but it is still forecast to weaken into a Cyclonic Storm in the next three hours.

As of 9:30 a.m. Tuesday, Cyclone Tauktae was a Severe Cyclonic Storm centred over Saurashtra, Gujarat—about 205 kilometres southwest of Ahmedabad, 125 kilometres south-southwest of Surendranagar, and 15 kilometres east-northeast of Amreli. The wind speed near the centre was 105-115 km/h, with gusts up to 125 km/h.

Cyclone Tauktae weakened into a Very Severe Cyclonic Storm (VSCS) at 11:30 p.m. on Monday night after making landfall as an Extremely Severe Cyclonic Storm (ESCS). The storm has moved over Saurashtra and is diminishing. After landfall, cyclones normally weaken quickly as the ocean heat and moisture that fueled the hurricane are no longer present.

The weakening storm, on the other hand, could inundate several parts of Gujarat, Rajasthan, Haryana, Delhi, Uttar Pradesh, Himachal Pradesh, and Uttarakhand with torrential rains.