K-pop band BTS met President Moon Jae-in, and he gave all BTS members their diplomatic passports and a fountain pen.

by Viveka Massey
in Entertainment, Music
31 0
0 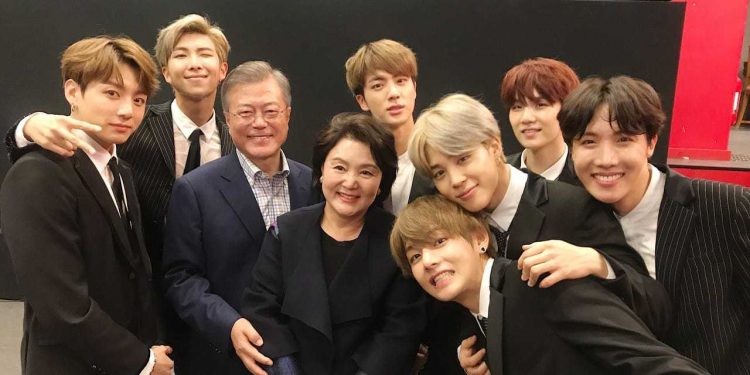 BTS is the number one k-pop boy band in the world. The Bangtan Boys have become a significant motivation source for all the youth in the world. The group was founded by Big hit entertainment, and their debut was in 2013. After a lot of struggle, these seven young boys have created history. They have received many awards and were nominated for grammy awards in 2017, and they performed at the AMAs. They became the first k-pop group to perform at an American awards show. BTS is considered the pride of Korea.

On Tuesday, K-Pop sensation BTS met the President of South Korea. They all greeted each other with fist bumps. They met President Moon to receive their appointment papers. The ceremony was held at the office and residence of the President, the Cheong Wa Dae AKA, the Blue House. The President gave all the members their certificate of appointment as the Special Presidential Envoy for Future Generations and Culture, their diplomatic passports, and a fountain pen. The President was glad to meet the pride of Korea. The videos and pictures of their unique greeting style went viral all over the world. Their army is giving lots of love and support and is very proud of the Bangtan boys. Fans are sharing pictures on the internet with beautiful captions.

One BTS fan shared a picture and captioned it- No words… I am just really proud of them… How much they have achieved… BTS, THE PRIDE OF SOUTH KOREA.

According to a report, on September 20, President Moon and BTS will attend the U.N. General Assembly in New York. Then on Monday, they will be a part of the second meeting of the Sustainable Development Goals Moment (SDG Moment) of the Decade of Action.

Check Out : BTS & Coldplay To Release A Track “My Universe” on September

The Blue House also issued a statement where they said, “As BTS has delivered messages of comfort and hope to the entire world. Its attendance at the U.N. General Assembly this time is expected to serve as a meaningful opportunity to expand communication with future generations around the world and draw their sympathy on major international issues.”