British Parliament barred the Chinese ambassador from entering its premises.

In response to the sanctions imposed by China, Britain banned the Chinese ambassador Zheng Zeguang from entering the Parliament. 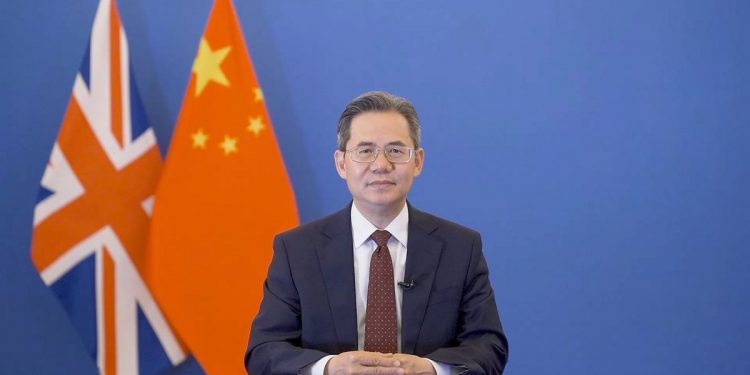 On Wednesday, Chinese ambassador to Britain, Zheng Zeguang, was scheduled for a talk. However, after a letter from MPs who were subjected to sanctions by China, Zeguang was barred from entering the Parliament premises. Lindsay Hoyle and John McFall (the speaker of the House of Lords) said that it would not be appropriate for Zheng Zeguang to speak at an event in Parliament.

Hoyle (the House of Commons speaker) said, “I regularly hold meetings with ambassadors from across the world to establish enduring ties between countries and parliamentarians. However, I do not feel that it is appropriate for the ambassador of China to meet on the Common estate. In our place of work when his country has imposed sanctions against some of our members.”

The new Chinese ambassador was about to attend a meeting of the broadly pro-Chinese language all-party group on China. However, after receiving a letter from MPs, including previous Conservative party chief Iain Duncan Smith, Zheng Zeguang was barred. The Commons Speaker, Lindsay Hoyle, has mentioned the assembly is just not acceptable.

Check Out : US President Joe Biden urged for unity as his country remembers the victims of the 9/11 attacks.

The decision for barring the Chinese ambassador came on Tuesday. The Chinese embassy said in a statement, “The despicable and cowardly action of certain individuals of the UK Parliament to obstruct normal exchanges and cooperation between China and the UK for personal political gains is against the wishes and harmful to the interests of the peoples of both countries.”

China imposed sanctions in March 2021 on nine British politicians, lawyers, and an academic for spreading lies and disinformation about the treatment of Muslim Uighurs. The sanctions lead to the blacklisting of the former and current officials in the Xinjiang region — Zhu Hailun, Wang Junzheng, Wang Mingshan, and Chen Mingguo — for alleged abuses.

United States, United Kingdom, and Canada joined European Union to send a clear message about the human rights violations and abuses in Xinjiang. Iain Duncan Smith, Tom Tugendhat, and a human rights lawyer who sits in the upper house, Helena Kennedy, were there in the sanctions. Smith wrote on Twitter, and he thanked the speakers for the action taken. He wrote, “This meeting should never have been proposed in the first place: the mother of parliaments that protects free speech and the liberties of free peoples.”

Check Out : Amidst The Afghanistan –Taliban Crisis, Biden Defend The Withdrawal Of U.S Force

Politician Tim Loughton who is also with the ruling Conservative party welcomed the decision. He said that China could not think that they could shut down free speech by parliamentarians in a democracy.

A statement from the Activists and United Nations experts says approx, one million Muslims have been detained in camps in Xinjiang. However, China has denied all accusations, and in response, it said those camps were vocational skills training centres.