Amy Schumer and pregnant Jennifer Lawrence participated in the rally for Abortion Justice in Washington D.C

Pregnant Jennifer Lawrence participated in the Rally with Amy Schumer for Abortion Justice in Washington D.C.

by Viveka Massey
in Entertainment
30 0
0 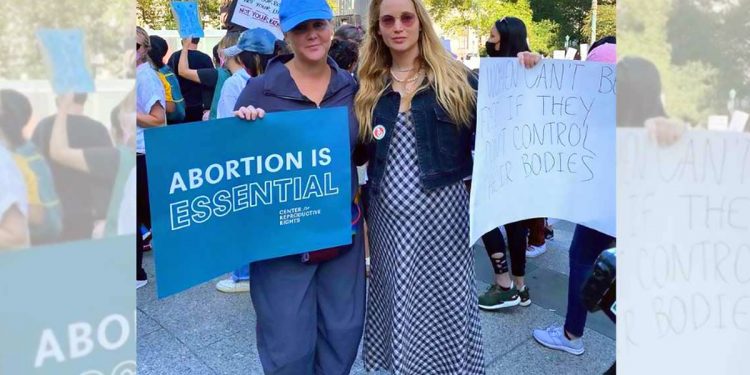 On Saturday, Jennifer Lawrence joined the rally for Abortion Justice in Washington D.C with her friend Amy Schumer and a thousand others. More than 650 marches took place. Many women protested across different cities in the U.S. They all are against the increasing restrictions on abortion. The ladies protested because the Supreme Court has considered another restrictive band on abortion rights.

Schumer posted a photo on Instagram of hundreds of women protests alongside Lawrence showing her baby bump. Schumer put a caption, “I don’t have a uterus, and she is pregnant, but we out here @womensmarch @plannedparenthood #rallyforabortionjustice 🙌🏼🙌🏼🙌🏼.” In September, a representative for Lawrence confirmed that she and her husband Cooke Maroney are expecting their first child together.

The comedian Schumer tried to conceive a second child, and she underwent IVF. Later she said on NBC’s Sunday Today with Willie Geist that she has decided not to be pregnant again because IVF was tough. Many people including, Rosanna Arquette, Sharon Stone, Kate Hudson, and Alicia Keys, showed their love and support on Schumer’s post by posting supportive emojis in the comments.

In the rally for Abortion Justice, many protesters gathered with banners proclaiming Bans off our bodies! as Cyndi Lauper’s Girls Just Want to Have Fun blasted from speakers. The comedian held a sign saying- abortion is essential. While Lawrence’s sign read- Women can’t be free if they don’t control their bodies.

Schumer was struggling with infertility, and she has been open about it. She revealed that last month she had her uterus and appendix removed because of endometriosis. It is a condition in which tissue typically found in the uterus starts to grow in other parts of the body. That leads to uncomfortable long-term pelvic pain during and between periods. Schumer shared a photo of herself speaking at the rally on Instagram stories.

Previous in an Instagram post, Schumer wrote, “I’ll be out there! Everyone deserves to have a safe and supported abortion at any time, and for any reason.” She added, “This Saturday, we are coming together across the country to defend our rights. Head to womensmarch.com to find a rally near you.”