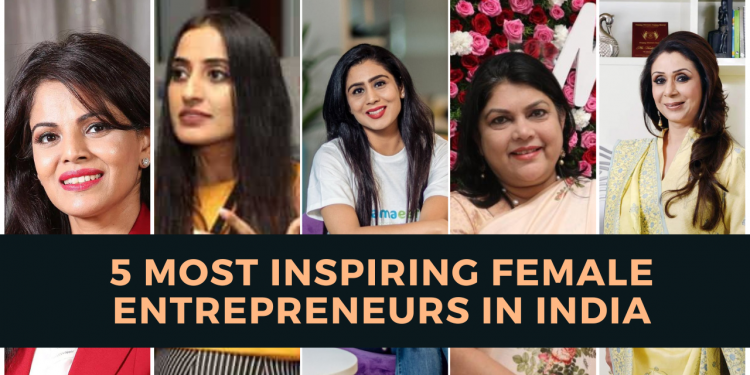 In India, female business owners of various ages and socioeconomic backgrounds are continually debunking myths and reshaping the commercial landscape. Women have various responsibilities for everyone, inspiring us in many spheres of life. But when it comes to business, they not only serve as an inspiration to us but also provide illuminating examples. Here are some of the most inspiring female entrepreneurs in India.

Vineeta Singh – Vineeta is the creator and CEO of Sugar Cosmetics and a judge on the reality show Shark Tank India. Sugar Cosmetics made 104 crores in revenue in 2020 despite a significant decline in sales in 2019. Since international markets account for 15% of Vineeta Singh’s brand’s sales, she exhibits a strong worldwide presence. Vineeta completed her education at Delhi Public School in R.K. Puram, Delhi; Vineeta graduated from the Indian Institute of Technology Madras (IIT Madras) in 2005 with a bachelor’s degree in electrical engineering. She left IIM-A in 2007 and enrolled in IIM-Ahmedabad to complete her MBA.

Falguni Nayar – At the age of 49, following a successful corporate career spanning more than two decades, Falguni Nayar founded Nykaa.Falguni Nayar picked up the ins and outs of networking at a young age while growing up in a business atmosphere supported by her tenacious father. She began her second era by founding an online store that sells women’s beauty items in 2012, after establishing her professional career with Kotak Mahindra Group. Nykaa, which primarily employs women, has progressively expanded its footprint by opening 80+ physical locations across 38 cities in addition to becoming a top e-commerce site. It quickly achieved another milestone with the establishment of in-house labels and the hosting of 2000+ brands.

Ghazal Alagh – On September 2, 1988, Ghazal Alagh was born in Gurgaon, Haryana. She is one of MamaEarth’s co-founders. In 2016, she alongside her husband Varun Alagh founded their firm, MamaEarth. The first cosmetics firm in India, MamaEarth, avoids using harmful substances or chemicals in its products. Ghazal Alagh served as a corporate trainer for NIIT Ltd. for two years in 2008. Ghazal’s first business, Diet Expert. in, was founded. After her initial attempt was unsuccessful, she continued on to her next project. MamaEarth, a direct-to-consumer personal care company, was launched in 2016. It has emerged as one of India’s fastest-growing FMCG brands in less than four to five years.

Vandana Luthra – The founder of VLCC Health Care Ltd., a beauty and wellness conglomerate with operations across Asia, the Gulf Cooperation Council, and Africa, is the Indian entrepreneur Vandana Luthra (born July 12, 1959). She also serves as the executive director of Pradhan Mantri Kaushal Vikas Yojana’s training program, the Beauty & Wellness Sector Skill Council (B&WSSC). She was chosen to serve as the Beauty and Wellness Sector Skill Council’s first chair in 2014. This offers training in the skills needed for the beauty business and is financed by the Indian government. In 1989, Luthra established VLCC in the Safdarjung Development Area of New Delhi as a center for beauty and health services that specialized in weight control programs based on dietary changes and exercise routines. The VLCC brand is well-known both domestically and abroad.

Namita Thapar – On March 21, 1977, Thapar was born in Pune, Maharashtra. Her parents encouraged her to follow her goals and gave her the best education they could. After working for Guidant Corporation in the U.S. for six years, Namita joined Emcure as CFO. She eventually increased her duties to include only the Indian market and is currently Emcure Pharmaceuticals’ Executive Director. She frequently speaks at renowned events like the E.T. Women’s Conference, Harvard Business School, the Indian Institute of Management Ahmedabad (IIM-A), and other well-known international venues. She has appeared in Shar Tank India, a reality television series produced by Sony Entertainment.