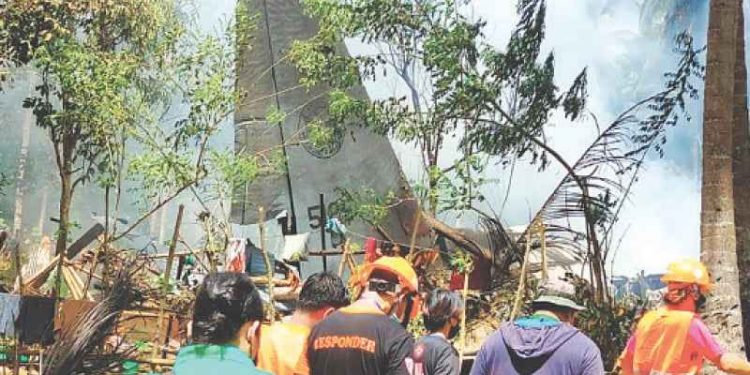 The jet had missed the runway as it attempted to land on Jolo island, according to Philippines Armed Forces Chief Cirilito Sobejana.

A Philippine military plane carrying troops crashed and erupted into flames after missing the runway in the country’s south, killing at least 45 people and injuring scores more, the armed forces said.

Around noon, a C-130 Hercules cargo jet carrying over 100 passengers, the majority of whom were new army grads, attempted to land on Jolo island in Sulu province.

According to Major General William Gonzales, commander of the Joint Task Force-Sulu, several of the soldiers were spotted leaping out of the jet before it crashed and erupted in flames. It was one of the deadliest military aircraft accidents in the country’s history. In a statement, Gonzales stated, “This is a sad day, but we must remain positive.” “We implore the country to pray for those who have been hurt and for those who have died.”

The hunt for 17 persons who have gone missing is still ongoing.

The damaged tail and the burning debris of the fuselage’s rear portion were seen among coconut palms in photos published by the Joint Task Force-Sulu.

Images posted to Pondohan TV’s Facebook page showed the wreckage engulfed in flames, with a cloud of dense black smoke rising above nearby homes.

The aircraft was transporting troops from Cagayan de Oro on Mindanao’s southern island when it “lost the runway” while attempting to land on Jolo, according to Armed Forces Chief General Cirilito Sobejana.

He informed local media that the jet tried to “regain power but didn’t make it.”

According to First Lieutenant Jerrica Angela Manongdo, the four-engine jet crashed near a quarry in a sparsely inhabited region.

According to early reports, the aircraft overshot the landing strip and split in two, according to Western Mindanao Command head Lieutenant General Corletan Vinluan.

The reason of the crash will be examined, according to Air Force spokesperson Lieutenant Colonel Maynard Mariano, while armed forces spokesman Major General Edgard Arevalo told DZBB radio that it was being viewed as an accident rather than an attack. The majority of the passengers had just completed basic military training and were being sent to the troubled island as part of a combined task force.

According to Gonzales, they were due to report for duty on Sunday.

Terrorist groups, notably the kidnap-for-ransom organisation Abu Sayyaf, operate in the southern Philippines, where the military has a strong presence.

For decades, C-130s have been the workhorses of air forces all over the world, transporting troops, supplies, and vehicles. They’re also frequently called upon to provide humanitarian aid and disaster relief.

The tail number of the Hercules that crashed on Sunday matches one that was purchased in the United States and delivered to the Philippines early this year.

He tweeted, “Are we buying faulty crafts… with the people’s money?”

The tragedy was regarded as “extremely sad” by presidential spokesperson Harry Roque, and US embassy Charge d’Affaires John Law expressed his “sincerest sympathies” to the victims’ families. Last month, a Black Hawk helicopter crashed during on a night-time training mission, killing all six people on board. The Philippines’ entire Black Hawk fleet was grounded as a result of the mishap.